It would seem that the “Tudor Legacy” series wraps up in this final book of the second trilogy. How much more is history skewed in this alternate realty? 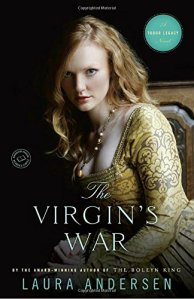 THE PLOT: Princess of Wales Anne Isabella, also known as Anabel, moves front and center in this book. She’s created her own court in the north of England, including her best friend Philippa Courtenay and Pippa’s twin, Anabel’s true love Christopher (known as Kit). The twins’ older brother, Stephen, has been disinherited and banished after his actions in book 2.

The separate court is a ploy to make Anabel’s father, Philip of Spain, think that Anabel has become estranged from her mother, Queen Elizabeth. By pretending to be sympathetic to the Northern Catholics, Anabel lulls Philip into believing that an invasion could land successfully and be joined and assisted by Anabel’s court.

In the meantime, Anabel is being courted by the Protestant Scottish King James, whose mother Mary, Queen of Scots, who is also married to Philip, is keen to lead the Catholic invasion force. (Whew! Got all that?)

MY TWO CENTS: Although Anabel is the star of this book, all the Courtenays play fairly large roles. (Even Lucie and Julien return for a storyline of their own.) The twins’ stories both revolve around their relationship with Anabel. Pippa, her dearest friend, is a seer whose fate has been hinted at in earlier books. Kit, who loves Anabel, knows that he can never marry her. Anabel will be queen of England, and she’s destined to marry King James. Anabel loves Kit, too, but like her mother, she knows her duty. She has no intention of putting her love before her country. Even Elizabeth, though, isn’t truly sure that her daughter won’t take Philip’s bait in order to marry the man of her choice.

Stephen Courtenay is wiser and more sympathetic in this book, as he meets up again with Maisie Sinclair. Pippa has always been one of my favorite characters, and she certainly has her moment to play a pivotal role in the plot. Dominick and Minuette are still Elizabeth’s beloved, trusted friends, and they stand with her as their children stand with Anabel in the North.

I have just loved these books. For one, the fictional characters are all believable and mesh well with the “characters” that really existed: Queen Elizabeth, Walsingham, Philip of Spain, Lord Burghley, and Mary, Queen of Scots. Second, Andersen is a master of following the ripples of change across the historical events.

BOTTOM LINE: A very satisfying ending. I could definitely keep reading Andersen’s skewed reality. Maybe she can tackle a different era now? Whatever is next for this author, I’ll be checking it out.

ON SALE DATE: The Virgin’s War will be available on July 12, 2016 in paperback and eformats.

The “Tudor Legacy” series continues in this second book of the second trilogy. I sound like a broken record on this blog, but if you like Tudor historical fiction and haven’t given these a try, you should. The ripple effect of the alternate reality is captivating.

THE PLOT: While The Virgin’s Daughter primarily focused on Lucette, the daughter Minuette and William (also known as King Henry IX), this volume focuses mostly on Stephen, the oldest son of Minuette and Dominick Courtenay.

Stephen is the reliable, dutiful older son, the one who will one day be Duke of Exeter. He heads off for military duty in Ireland, where he learns some hard truths about combat, loss, and betrayal. His extended recovery brings him back to England, but guilt and a need for revenge shape his future. He volunteers to go undercover as a spy for Walsingham, but he may not realize the full cost until it’s too late.

Meanwhile, younger son Kit is trying to put some much-needed space between him and Anabel, the Princess of Wales. He knows full well that Anabel has to marry royalty, despite whatever affection lies between them. He heads with his family to Spain to visit Anabel’s father, King Philip, and his new wife…Mary, Queen of Scots. Kit’s twin sister, Pippa, carries some secrets of her own.

Anabel is left to be courted by the Duke of Anjou and King James of Scotland, but Anabel’s mother, canny Queen Elizabeth, throws a shocking curve into the proceedings.

MY TWO CENTS: One of the reasons these books succeed is because they follow a true path of how history might have progressed if one certain event had changed (Anne Boleyn giving birth to a surviving son). This means that the story is often gritty and unpleasant even when the reader wants everyone to get a happy ending. For example, poor Stephen really goes through the wringer in this book, and he also makes some terrible decisions. You understand why, even while you’re thinking, “No, Stephen, DON’T!” I was definitely engaged in Stephen’s story.

I also wish there could be a happy outcome for Kit and Anabel, but I just don’t see it happening. There can’t be a situation where Kit becomes king consort to Anabel’s queen.

I’m really interested to see what happens to Their Most Catholic Majesties, Philip and Mary. It would seem that war is on for the last book in the trilogy, but Philip may be reluctant to harm his own daughter.

BOTTOM LINE: Critical development took place in this volume, and I wish The Virgin’s War would be here sooner than July 2016. I also hope Laura Andersen is planning to continue the story, or maybe tackle another period of history with an alternate twist.

ON SALE DATE: The Virgin’s Spy is available now in paperback and eformats.

Yay, the alternate reality of the “Tudor Legacy” series continues! If you aren’t familiar with this series, but it seems appealing to you, you need to start with the first trilogy: The Boleyn King, The Boleyn Deceit (reviewed here), and The Boleyn Reckoning (reviewed here).

****SPOILER WARNING: This review will contain spoilers for the first three books.****

THE PLOT: Like the first trilogy, this new trilogy takes place in an alternate reality where Anne Boleyn gave birth to a legitimate, living son after Elizabeth. Unfortunately, Henry IX, known to his family and friends as William, pretty much self-destructed from rage and jealousy, and tried to take his two former friends, Dominic and Minuette Courtenay, with him. After his death, his older sister Elizabeth becomes queen and marries Philip of Spain.

Twenty-two years later, Elizabeth is the target of the Nightingale Plot. She is divorcing Philip and fighting to make sure their daughter, Anne Isabella (or Annabel to her family), stays the Protestant heir to the English throne. Elizabeth turns to her oldest friends, Dominic and Minuette Courtenay, and their children for help. Of course, Minuette’s oldest daughter, Lucette, is also Elizabeth’s niece through William, and her mind is Tudor-sharp like her aunt’s. Walsingham sends Lucette to spy on the Courtenays’ old friends, the French LeClerc family. One of Renaud’s two sons is the Nightingale mastermind, but which one? Nicolas, the respectable, wounded widower, or Julien, the reckless charmer?

In the meantime, Lucie’s brother, Stephen, is sent to help guard the imprisoned Mary Stuart, Queen of Scots, and may be falling under her influence. The last two Courtenays, twins Pippa and Christopher (Kit), are Princess Annabel’s best friends. But can they keep her safe? And what hope does poor Kit have when he realizes he’s in love with Anne, even as suitors start to compete for her hand?

MY TWO CENTS: If you’re familiar with my blog, you know I love Tudor nonfiction and fiction…and I especially love these books! I’m just amazed at how the author has created this parallel world, and how decisions she made in the earlier books are addressed again here. (Example: Guildford Dudley didn’t marry Jane Grey, who never tried to usurp the throne from Mary Tudor, who was never a legitimate heir because Henry VIII’s marriage to Anne Boleyn was never invalidated. But Guildford did marry and have a son, who is one of Elizabeth’s favorites, like his uncle Robert before his execution.) The author must have TONS of notes on the ripple effect each historical change has on so many other factors.

As far as characters, I liked Lucette even more than I did her mother, Minuette, in the earlier books. Lucie is a perfect blend of the best of the Courtenays and the best of the Tudors, yet still makes mistakes. For example, she’s so intelligent and quick at puzzles, yet the mastermind still stays one step ahead of her. I liked the other Courtenay offspring as well, and can’t wait to find out what Stephen does next, how Pippa develops, and if Anne and Kit can have a future.

I could complain that I figured out where the Nightingale Plot was ultimately headed, but I think the ride was and will continue to be enjoyable. Also, the ending showdown was suspenseful enough to keep the reader guessing. After all, Andersen did prove in the first trilogy that anyone is expendable.

My one tiny gripe, which is a really tiny stupid gripe, is…the title. In this reality, Elizabeth was married for 20 years to Philip and bore his child, so she was never really “The Virgin Queen.” I realize that the title will attract those interested in Tudor historical fiction, but it kind of doesn’t make sense with the plot. Very, very small point, though.

BOTTOM LINE: I love how Laura Andersen is careful to pull all the relevant threads into her world and make it a realistic “what if” scenario. I enjoy these books so much, and can’t wait for the next one, The Virgin’s Spy.

Note: Review is based on an ARC provided by the publisher via Edelweiss in exchange for an honest review.