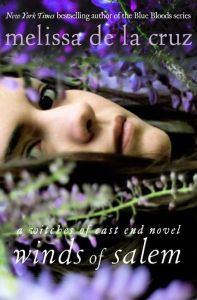 When I first starting reading Melissa de la Cruz’s Blue Bloods series, I was really drawn in. Since the Beauchamp (or Witches of East End) series was connected to Blue Bloods, only aimed at adults, I was eager to read it. But by the time I got to the final Blue Bloods novel, I felt the series had run out of steam, and I feel that way about this series as well.
THE PLOT: in this installment, Freya Beauchamp is stuck in 1692 Salem without her memory. Her parents and sister Ingrid are working in the present to get her back. Ingrid is still dating Matt, but it’s slow moving. Freddy’s marriage hits the rocks while he frets about who framed him.

MY TWO CENTS: I really liked the first book, The Witches of East End, which rotated among Joanna, Ingrid, and Freya ‘s points of view. I just don’t think the addition of Freddie helped, or Norman, or the pixies. It just kind of devolved into a muddle. I also think the “trapped in the past” storyline didn’t really contribute much to the overall story arc. I wonder if my interest in the Norse gods aspect diminished, though, because when I think of Thor or especially Loki, I think of this:

TEACUP RATING: I give this book two-and-a-half teacups. It’s okay, it’s readable, but if it’s the finale to the series, it’s disappointing. I’m also not sure I would pick up another title in the series if one was published. However, I am going to check out Melissa de la Cruz’s next novel, Frozen, which is being published in September. I want to see if this new series captures me like her earlier books did.