I tend to find Star Wars books somewhat hit-or-miss, but this first book in a new series was kind of in the middle for me.

THE PLOT: The book takes place after A New Hope, but before The Empire Strikes Back.  Leia and Han are on an Alliance mission, but get caught up with some half-hearted pirates…native Alderaanians who have survivor’s guilt. Then there are the deadly serious pirates, who capture everyone; and finally, the Imperials swoop in along with a spy set close to our heroes. Most of the book is from Leia’s point of view, with some from Han when they’re separated, and a teeny bit from Luke. (He’s not in it very much.) No Vader, no Emperor, not much Chewie.

MY TWO CENTS: First, the good: this is really good time setting for Star Wars novels. Luke and Leia don’t know about their relationship to each other or Vader; Leia and Han are flirty but not yet serious. And what did they accomplish after the Death Star blew up, before Hoth? Also, this book allows Leia to shine on her own, both as a diplomat (her verbal battle with pirate leader Viest while trying to hide her body language, which Viest can read, is a high point) and physically (the arena battle she’s forced to fight). We’re reminded that this is the princess who blows holes in garbage chutes when her rescuers don’t have a plan.

Then, the bad: Unfortunately, you know going in that everyone in the core group will come out okay, so there’s not as much tension. Also, if you’ve read far into the Expanded Universe future, you know the newly introduced characters aren’t important to any other story (unless there’s something I missed, which is always possible). You know they either end up dead or are just disposable. So this book is kind of just filler. It was a pretty slow read for me. It started out well, but I just kept falling out of the story. I wasn’t consistently into it.

BOTTOM LINE: I would really only recommend this one if you’re a completist or a serious Leia fan. However, I will still check out the next book in the series, the Han book Honor Among Thieves by James S.A. Corey, which releases in March 2014.

TEACUP RATING: Three teacups, but a bonus for this great line from Threepio, translating for Chewie, to Luke: “He says it can’t be the Death Star, as you might recall the memorable occasion when it blew up.”

The Heavens Rise by Christopher Rice 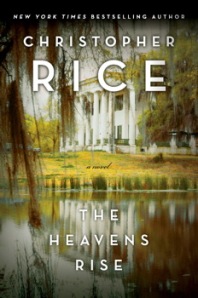 I had never read a Christopher Rice book before, but the description intrigued me. After reading this book, I’ll be likely to read more of his work.

THE PLOT: The story primarily follows two main characters: Marshall Ferriot, who is a violent maniac even before he obtains supernatural powers, and Ben Broyard, the gay best friend of Niquette (Nikki) Delongpre. Teenage Nikki and her parents go missing one night after Marshall sticks a snake in their car as revenge for Nikki’s rejection of him. Marshall had arranged for Nikki to believe her boyfriend, Anthem, was cheating on her, so he could move in. Nikki befriended Marshall, but turned him away when he made his move. But it was too late; they had both picked up an ancient parasite in the pool Nikki’s parents were having dug. The rest of the book is mostly a supernatural mystery: what really happened to Nikki and her parents eight years ago? How did Marshall really wind up in a coma, and how do people die violently near him? Ben, now a reporter and helped by recovering alcoholic Anthem, works to piece together the truth.

MY TWO CENTS: This book contained elements of two of my favorite horror books: Stephen King’s IT and Anne Rice’s The Witching Hour. (My sincerest apologies to Mr. Rice on pulling his mother into the conversation, but I can’t help the comparison when this book is set in New Orleans with a rich, unresponsive, wheelchair-bound main character who also has supernatural powers.) However, it’s not nearly as terrifying as either of those two books, which gave me nightmares in young adulthood!

BOTTOM LINE: This is a good book for Halloween week. It’s not overly scary, and the reader is carried along easily through the story. And really, isn’t New Orleans a great setting for a horror story? (Yes, I’ve been watching American Horror Story–Coven. ‘Tis the season.) I really liked the character of Ben as our hero, and Marshall was a totally deplorable villain.

TEACUP RATING: I give this book four teacups…I think I wanted a little more from the ending. However, I found it a thoroughly enjoyable read.

Elizabeth of York: A Tudor Queen and Her World by Alison Weir

Alison Weir writes my absolutely favorite nonfiction. I couldn’t wait to get my hands on this timely biography of Elizabeth of York: daughter, sister, niece, wife, and mother to kings, and she perhaps should have been queen of England in her own right.

THE COVERAGE: The book begins with a quick summary of the beginning of the Wars of the Roses. It’s not enough to give a lot of details or overwhelm the reader, but glances over Henry VI, the Kingmaker Warwick, and how Edward IV got to the throne. Elizabeth’s story then begins with birth of Edward’s first child, a princess. It continues through her trips into Sanctuary, engagement to the French dauphin, possible romance with Uncle Richard III, marriage to Henry VII, riding out various pretenders who claim to be one of her lost brothers (the “princes in the tower”), birth of royal children (including Arthur, first husband to Catherine of Aragon; Margaret, queen of Scotland; Henry VIII; and Mary, queen of France), and eventual death and burial.

MY TWO CENTS: The good thing about Elizabeth of York is that as a person in the middle of significant historical turmoil, there are a lot of primary sources about her family, so we have quite a lot of fairly accurate information about her entire life. (Of course, some information can never be “accurate,” such as the fate of her brothers or her and Henry’s private true feelings for each other.) The bad thing about Elizabeth of York is that, unlike her mother, she was a person to whom things generally happened as opposed to someone who made things happen. While her story is very interesting, keep in mind that she’s pretty much never the master of her own fate.  I call this a “timely” biography in that The White Queen has just been airing in the USA, and Philippa Gregory’s last bestseller was The White Princess. (For what it’s worth, the historical Elizabeth is a much less wishy-washy character than Gregory’s fictional Elizabeth.)

TEACUP RATING: I give this five teacups, but remember, I generally love Alison Weir’s nonfiction. (Her fiction can be hit-or-miss for me, although I found the last one, A Dangerous Inheritance, very good.) Some readers may be tempted to skip over lists of Elizabeth’s accounts…I personally find that primary source fascinating.

ON SALE DATE: Elizabeth of York: A Tudor Queen and Her World will be on sale in the USA on December 3rd.

I wonder if there’s ANY supernatural element that hasn’t been covered in Young Adult in the wake of Twilight’s popularity… there have been mindreaders, angels, consorts to Greek gods, vampires who are really angels, magicians, citizens of the lost city of Atlantis, more angels… and now there’s time travelers.  However, I was really sucked in by the ad copy that promises past-life experiences. I thought immediately of L.J. Smith’s Night World: Soulmates, which may be my favorite Night World book.

THE PLOT:  Jenny is kind of a social outcast. What people don’t know about her “weirdness” is that she can read people’s past lives through touching them (so, shockingly, she goes out of her way to avoid touching people). When she receives a freaky message through a ouija board, though, Jenny’s powers seem to kick in greater than ever. She meets a boy named Ben who seems standoffish at first, but in his attic, he and Jenny find a music box that contains instructions for putting people in a trance.  Jenny and Ben realize they share a past history with Nikolai, a young man in their shared dream, who lived around 1917. Oh, and Jenny was one of the Romanov princesses…not Anastasia, thankfully; she was Grand Duchess Maria. But then Jenny realizes Nikolai is hanging around in the present, and how is that possible???

MY TWO CENTS: I really liked this book until about halfway through, when it started to slow down a bit. At first, even the writing reminded me of L.J. Smith’s (before her writing hiatus). It was very straightforward and yet painted a very clear picture without too much description. I did get a little disappointed in the second half. I enjoy both Romanov-related history and reincarnation stories, but I just wanted a little more from the book.

BOTTOM LINE: It’s definitely worth giving this book a read if the subject matter appeals to you. I do hope the romance heats up a little, though. I was more interested in the friendship between Jenny and Ben than the “timeless love” of Jenny and Nikolai.

TEACUP RATING: I give this book three-and-a-half teacups. The first half was much more interesting to me than the second, so I have hopes for the obvious sequel…which I’ll be happy to read.