Once upon a time (actually, not as long ago as one might think), Meg Cabot wrote a series of six books about about a teenage girl named Suze Simon, who could see and talk to ghosts. In addition, her job was to help the ghosts with whatever unfinished business kept them from moving on (hence, “mediate”). She was also romantically interested in the ghost who lived in her bedroom, which was unfortunate, as he was, well, dead.

Now, as in last year’s Royal Wedding (reviewed here), Meg Cabot grants her fans’ wishes by following up with adventures of an adult Suze, her family, friends…and an old enemy.

****SPOILER WARNING:**** This review will include spoilers for the first six books of the “Mediator” series. 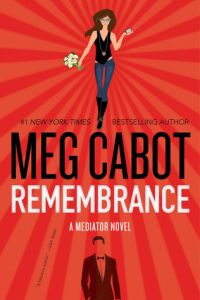 THE PLOT: Suze is interning in the office of her old high school and still mediating with Father Dominic. She’s engaged to former ghost Jesse, who is a doctor hoping to open his own clinic. Things are going well for the couple until two events happen on the same day. First, Suze is contacted by her old mediating partner/nemesis Paul Slater, who is now a big-time developer. It seems he’s purchased Suze’s family’s old house…the one Jesse haunted. And according to an old Egyptian curse, if he tears it down as he plans, Jesse will become a demon. But Paul will cancel the demolition if Suze agrees to spend one night with him.

After Suze finishes telling Paul off (which does not get rid of him and his proposition permanently), she tends to an injured teenage student who is unknowingly accompanied by the ghost of her childhood friend. When the ghost, Lucia, fears that Suze is going to hurt her host, she causes earthquake-like destruction in the office. So Suze is on the case, trying to figure out who Lucia is, how she died, and why she’s specifically connected to her friend Becca.

While she deals with the case, Suze worries about Jesse losing humanity; discovers two secrets about her triplet step-nieces; and plots how to keep Jesse from finding out about Paul’s ultimatum (and probably killing him).

MY TWO CENTS: True confessions: I liked the “Mediator” series even more than I liked the “Princess Diaries” books. So it makes sense that I was more excited for this one than Royal Wedding.

It seemed a little slow out of the gate. The phone call with Paul contained a lot of exposition, so it seemed to go on a bit too long despite the banter. I felt like once the mystery was in full-swing, I was thoroughly hooked. And the revelations about the triplets were a neat added element.

I might have enjoyed the relationship between Suze and Jesse more if I had reread the first six books before I read Remembrance. Since I didn’t, I felt almost like Jesse was a secondary character instead of a lead. His job was to be noble and pure and good, which he did well, but that’s not as fun as a noble and pure ghost. Okay, yes, there was the possibility that he might turn into a demon once his former dwelling was torn down, but that just didn’t seem like as much conflict as Paul being threatening because, of course, Paul LOVES Suze and threatening is how you express love. Or a vengeful ghost trying to drown her.

If you are an adult reader who never read the YA books, I think you can still enjoy Remembrance as a standalone. I don’t think you’ll get as much out of it, though, so I really do recommend reading the original series before going on to this.

BOTTOM LINE: A fun catch-up with favorite characters. I found the ghost mystery more enthralling than the romance between Suze and live Jesse. I’m probably in the minority, but I still find Paul a fun villain. Can we get a new YA series about the triplets? Come on, Mia’s little sister has her own series now.

ON SALE DATE: Remembrance is on sale now in paperback, hardcover, eformats, and audio.

Note: Review is based on an ARC provided by the publisher via Edelweiss in exchange for an honest review.