Stay With Me by Elyssa Patrick (With Me series, #1) 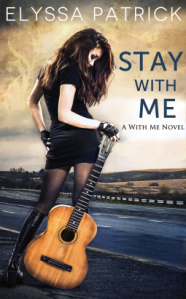 Okay, here’s the thing. I SHOULD get on a pretentious soapbox about how this novel wasn’t very intellectual and had far too much sex, but the thing is…I kind of liked it. I’m not in the appropriate age group for “New Adult” and I hated the one other New Adult book I read with a fiery passion, but something made me want to read this one. And I found it entertaining in a mindless, blue sky kind of way.

THE PLOT: Hailey Bloom was a child star who became a provocative music star and movie actress as a teen (think Britney or Miley). But now that she’s 18, she’s ditched her stage mom for college so she can discover what SHE wants to do with her own life. She’s afraid of never being able to make real friends because of her stardom, but that changes when she meets Caleb Fox, his family, and his friends. Hailey begins to open up and trust other people, even while she’s afraid her scumbag of a mother will reveal something she’s managed to keep from the press thus far. She just knows that if Caleb learns her secret, it will destroy their relationship.

MY TWO CENTS: Caleb is pretty much a Mary Sue of a boyfriend; he’s absolutely perfect and never does one wrong thing. It’s totally unrealistic, but within the parameters of the novel, this is really the only kind of boyfriend Hailey would be able to handle. One wrong step from him and she would have pulled right back into her shell. So while there’s very little conflict between the characters, it seems…okay. Hailey’s secret is pretty predictable, the reader is given a big ol’ hint early on anyway.

PARENT WARNING: This emerging category of “New Adult” is aimed at older teens and people in their early 20s; older than the young adult category, but still about young people. If your young teen wants to read this, be aware that the sex scenes are pretty darn hot. I don’t read erotica, but I bet this is close without containing bondage, etc. Also, there’s plenty of underage drinking.

BOTTOM LINE: I feel that this was a very guilty pleasure book for me. I didn’t LOVE it, but I did ENJOY it. I enjoyed it enough to follow the gang into the next two “With Me” books in the series.

TEACUP RATING: I give it about three-and-three-quarters teacups. I’m sure people in the target age group will call it the most romantic thing they’ve ever read and give it 100 million stars.