Trade Me (Cyclone #1) by Courtney Milan

As a rule, I generally don’t care for contemporary romance. I much prefer historical settings, and I usually feel like contemporaries end up being much more about sex than romance. (Jude Deveraux is my exception.) But I have recently chosen to read two contemporaries  written by two of my favorite historical romance authors. The first is Trade Me, a New Adult by Courtney Milan and the first in her new Cyclone series. 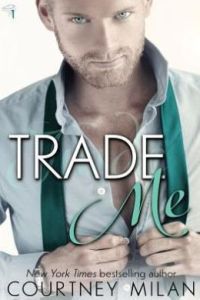 THE PLOT: Tina Chen is a really poor, struggling college student. She lives on rice in order to send money to her family…and then her mother gives it all away to other people. Tina is pretty fed up when she loses it over comments made by classmate Blake Reynolds, the pampered son of the super-wealthy owner of Cyclone, a Fortune-500 technology company. Blake has been interested in Tina for a long time, but he’s been dealing with a lot of issues…including how to avoid taking over the company from his father. For him, college is a deflection, NOT the only way to a better life like it is for Tina.

After the blow-up, Blake starts bonding with Tina. As her learns about her, he offers to trade lives with her for a short time. She can write the script for the reveal of Blake’s incredible new Cyclone product, live in his house, drive his car, and earn his salary. He’ll live in the garage she calls home, washing dishes for a job and living on Tina’s meager salary. Tina agrees under the condition that when time’s up, they have no relationship whatsoever…no friendship, no romantic involvement. Mutual attraction will play havoc with this plan, though.

MY TWO CENTS: I couldn’t stop reading this book. Yes, it requires a certain suspension of disbelief, but that didn’t bother me. Blake is a likable character, and he wrestles with a problem you don’t usually see with male characters. Tina and her family are so well-written that they might actually exist. I could feel Tina’s anguish in dealing with her mother, as well as her sense of responsibility for the family.

BOTTOM LINE: I really enjoyed this story and both main characters. I’m definitely looking forward to Book 2 in the series, Hold Me, which will include a transgender character (Tina’s best friend and roommate).

ON SALE DATE: The book is available now in paperback and eformats.

I just love a book that forces me to look up the difference between “hoodoo” and “voodoo.”  (For the record, the short version is that voodoo is a religion of Caribbean origin, while hoodoo refers to magic practices of African origin.) And the hoodoo fun is certainly ramped up in this sequel to Dark Paradise (reviewed here).

SPOILER ALERT: This review contains some spoilers for Dark Paradise. 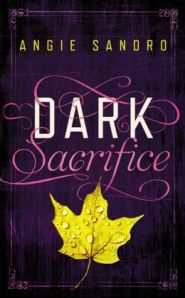 THE PLOT: Again, the book is presented in first person present tense with alternating chapters narrated by Mala and Landry. When we left off at the end of book one, Mala was in a pysch ward and Landry was in jail. Landry is almost killed by a fellow inmate, and a demon from the other side hitches a ride back on Landry’s soul. After Mala and Landry are both released, they return to Mala’s house, along with various ghosts, to try to figure out the identity of the 4th murderer of Mala’s  mother. In the meantime, a revelation is made about Mala’s parentage, and we’re reminded again that in the world of Paradise Point, everything isn’t always what it seems. Is Landry’s father a murderer or a protector? What’s George (AKA Deputy Dawg, LOL) up to in all this? And then, Aunt Magnolia shows up to collect Mala and take her to New Orleans to become her hoodoo apprentice amidst great wealth and opulence. Is Mala ready to become the hoodoo queen of New Orleans?

MY TWO CENTS: I feel like this series is a New Adult version of, say, True Blood. There’s plenty of otherworldly wackiness with ghosts and zombies (but no vampires, thank you SO much!) But that rural mysticism seems so believable within the framework of the story. I loved how the action moved along and the characters developed. I loved all the New Orleans segments, and the nail-biting finale will keep you reading until the very end. (I was dead wrong about the identity of the fourth murderer, so I don’t think it was predictable at all.) Some plot points were wrapped up while others were left hanging. I can’t wait to see how everything wraps up in book 3, Dark Redemption.

BOTTOM LINE: Another strong entry in this series. If you like Gothic mystery and magic, and you’re wondering if this is a series worth becoming invested in…the answer is yes. Pick up Dark Paradise and dig in. If you read Dark Paradise and liked it, you’ll probably like this one even better.

TEACUP RATING: At least 4½ out of 5 teacups. Even though I’ve read the ebook ARCs, I may have to invest in a paperback set of the series for my library.

ON SALE DATE: The book will be available in trade paperback and ebook formats on August 5, 2014. (Check back here on that day for more information!)

Stay With Me by Elyssa Patrick (With Me series, #1)

Okay, here’s the thing. I SHOULD get on a pretentious soapbox about how this novel wasn’t very intellectual and had far too much sex, but the thing is…I kind of liked it. I’m not in the appropriate age group for “New Adult” and I hated the one other New Adult book I read with a fiery passion, but something made me want to read this one. And I found it entertaining in a mindless, blue sky kind of way.

THE PLOT: Hailey Bloom was a child star who became a provocative music star and movie actress as a teen (think Britney or Miley). But now that she’s 18, she’s ditched her stage mom for college so she can discover what SHE wants to do with her own life. She’s afraid of never being able to make real friends because of her stardom, but that changes when she meets Caleb Fox, his family, and his friends. Hailey begins to open up and trust other people, even while she’s afraid her scumbag of a mother will reveal something she’s managed to keep from the press thus far. She just knows that if Caleb learns her secret, it will destroy their relationship.

MY TWO CENTS: Caleb is pretty much a Mary Sue of a boyfriend; he’s absolutely perfect and never does one wrong thing. It’s totally unrealistic, but within the parameters of the novel, this is really the only kind of boyfriend Hailey would be able to handle. One wrong step from him and she would have pulled right back into her shell. So while there’s very little conflict between the characters, it seems…okay. Hailey’s secret is pretty predictable, the reader is given a big ol’ hint early on anyway.

PARENT WARNING: This emerging category of “New Adult” is aimed at older teens and people in their early 20s; older than the young adult category, but still about young people. If your young teen wants to read this, be aware that the sex scenes are pretty darn hot. I don’t read erotica, but I bet this is close without containing bondage, etc. Also, there’s plenty of underage drinking.

BOTTOM LINE: I feel that this was a very guilty pleasure book for me. I didn’t LOVE it, but I did ENJOY it. I enjoyed it enough to follow the gang into the next two “With Me” books in the series.

TEACUP RATING: I give it about three-and-three-quarters teacups. I’m sure people in the target age group will call it the most romantic thing they’ve ever read and give it 100 million stars.