The Autumn Throne (Eleanor of Aquitaine #3) by Elizabeth Chadwick

This is the final book in Elizabeth Chadwick’s historical fiction trilogy on the life of Eleanor of Aquitaine. It follows book 1, The Summer Queen, and book 2, The Winter Crown (previously reviewed here). 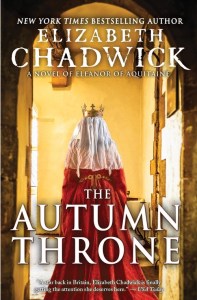 THE PLOT: Exploring the final 30 years of Alienor’s life, Book 3 starts with her imprisonment at Sarum after her sons’ failed rebellion against their father, King Henry II. Occasionally, Henry will pull Alienor out into the world…usually if he wants something from her. For a while, he tries to convince her to grant him an annulment and become a nun so he can marry again. Of course, there’s no way Alienor is going to be bullied into giving up her titles.

In the meantime, Henry continues to play mind games with his sons: Harry, the Young King; Richard; Geoffrey; and John, who watches his father’s slimy ways with women and politics and learns to emulate them.

Death robs Alieanor of too many of her children, including Harry and Geoffrey. When Henry himself dies, Alienor is finally free…and her favorite son, Richard, becomes king. A new phase of Alienor’s life opens as she becomes regent while Richard is first on crusade, then imprisoned. Surviving son John is a thorn in everyone’s side, but Alienor now also has some beloved grandchildren as her companions.

MY TWO CENTS: I loved this whole series. This book might have been a bit of a challenge for the author, as Eleanor spends the first chunk imprisoned and stripped of power. But Chadwick deftly uses this part of history to show what Eleanor might have done to occupy her time, and anyway, it’s all the more satisfying when Eleanor outlives her tyrant of a husband. In addition, we get some perspective into John’s thoughts and machinations, starting from when he’s pre-adolescent.

It also could have become a bit depressing, as there are so many deaths and the reader knows Eleanor’s own death ends the book, but it never seems to be a “feel bad” downer book. I think most readers of historical fiction already know the basic historical facts, and the book’s job is to make that history come alive for the reader. Every Elizabeth Chadwick book I’ve read so far has accomplished that for me.

Now that this series has ended, I wonder what Chadwick has planned next. I almost hope it’s a book about John. She’s already set him up as a slippery little weasel, so that should work nicely into a book focused on him.

COVER NOTES: I’m so glad the US publisher stayed with the original cover design of The Summer Queen for the whole series…I like these better than the more generic artistic title-focused covers that the UK publisher switched to. The color palette ties nicely into the title.

BOTTOM LINE: A fitting end to a wonderful trilogy on Eleanor’s eventful life. These three books provided a beautifully detailed exploration of the period.

ON SALE DATE: Available October 4, 2016, in paperback and eformats.

The Winter Crown (Eleanor of Aquitaine #2) by Elizabeth Chadwick

This is the third Elizabeth Chadwick book I’ve read, and I just love her work. The other two I’ve read relate to this one and are well worth reading if you enjoy historical fiction. The first, Lady of the English, is the story of Henry II’s mother, the Empress Matilda, who fought all her life for the English crown. The second is the first book in this series about Eleanor of Aquitaine: The Summer Queen. This book, The Winter Crown, is book two in the “Eleanor of Aquitaine” series. 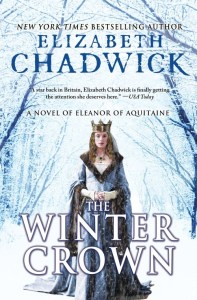 THE PLOT: This book picks up right after the end of The Summer Queen. After her horrible marriage to Louis VII of France, Eleanor (called Alienor in these books) dares to think she might be happy. She and her new husband, Henry, have been declared King and Queen of England, and their family is quickly expanding. Alienor is enjoying the power and passion she shares with Henry, but she’s concerned that he might just see her as a brood mare, the vessel by which he’ll gain plenty of heirs. After all, if he keeps her pregnant and recovering, she’ll be less able to rule her own duchy and he’ll have even more power. By the time Alienor gives birth to her last child, John, Henry is moving on from various mistresses to just one: the teenage Rosamund de Clifford.

Henry is proud of their many children, but as they grow toward adulthood, he’s reluctant to allow them any real power. He has their son Harry crowned king alongside him, but won’t give him any responsibilities. Second son Richard is the heir to Aquitaine, but with some underhanded maneuvering, Henry makes it appear that Aquitaine is a vassal of England. The daughters are sent away to other countries as alliance brides way too soon for Alienor. What once was a promising, passionate marriage falls apart, and an angry Alienor gives up calming her sons’ anger against their father. When all-out rebellion breaks out, Henry blames Alienor.

MY TWO CENTS: What I enjoy most about Chadwick’s work is how natural it feels, how you sink into this world of almost 1,000 years ago and feel as though you’re really in it. It never strikes a false note for me. I never feel as though I’m reading something modern masquerading as historical. Chadwick does a great job filling in day-to-day details of life in the 1100s and making them seem authentic.

Alienor is written as a very human character. She doesn’t adore her mother-in-law, Matilda, but she’s perfectly willing to use her as an ally. She loves her children, but mourns the lack of relationship of the abandoned daughters she had with Louis. She admits that Richard is her favorite, but she also scolds his hot-headedness and lack of self-discipline. She doesn’t love Henry, but she wants a pleasant marriage with him…right up until she’s had enough.

We also see Henry’s transition from ambitious young man to overbearing tyrant. He always wanted everything his own way, but as time goes on, he just gets more and more ruthless. If you know anything about Henry and Eleanor, you know how their relationship ends. It’s to Chadwick’s credit that the reader keeps hoping that history will somehow change and Eleanor will get a happy ending.

BOTTOM LINE: If you already enjoy Chadwick’s work, you’ll love The Winter Crown. If you’ve never tried Chadwick before but love historical fiction, I recommend starting with The Summer Queen and then going on to this. Then, while you wait for the release of Book 3, The Autumn Crown, read Lady of the English. I’m heading on to her William Marshal novels.

TEACUP RATING: Five out of five teacups. Chadwick has become an auto-buy for me and this doesn’t disappoint.