Anyone who reads my blog knows that I love the Splintered series by A.G. Howard, a modern-day Goth spin on “Alice in Wonderland.” The trilogy, started with Splintered (reviewed here) and Unhinged (reviewed here), will conclude with Ensnared in January. The author has been doing a week-long cover reveal that concluded today on Two Chicks on Books. The cover showcases Jeb: 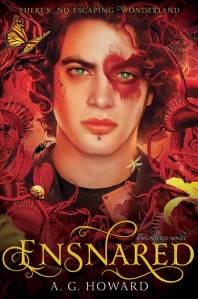 If you saw the preliminary cover, which was yanked after it was accidentally posted on Edelweiss, you should agree that this is a big improvement. I generally don’t care for Jeb as a character (I’m a Morpheus fan), but this Jeb looks sympathetic and vulnerable (as opposed to the almost villainous looking Jeb on the prelim cover). I love that it’s red, so it looks great with the other two covers from the series.

Ensnared will release in hardcover and ebook formats on January 6, 2015. Are you excited? I’m excited!

« Doctor Who: The Bog Warrior (Time Trips Series) by Cecelia Ahern
The Fortune Hunter by Daisy Goodwin »
%d bloggers like this: